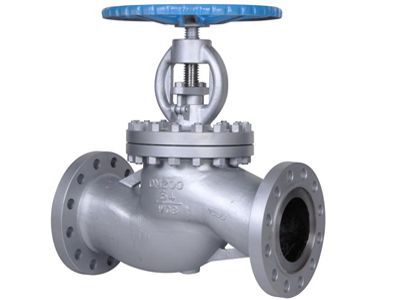 Globe Valve and Check valves look very similar on the outside, but operate very differently.Globe valves have always been widely known as an industry standard for controlling and throttling fluids. A globe valve is comprised of two Valves, separated by an opening with a moveable plug or disc that can be screwed in, or unscrewed to open and close. They're most commonly used to open, close, or throttle flow in a system. All globe valves are designed with a stem that moves up and down to regulate flow inside the valve, contains a disc (ball, composition, or plug), and seat which is generally screwed into the valve body. Seats are designed in plane parallel or inclined to the line of the flow. The Globe Valve is named after its shape. Its body has an interior partition, and the valve inlet and outlet centers are inline. This configuration forces a change in the direction of flow in the form of an S.The disc impedes the flow of fluid by pressing against the seat in the partition. Concept: Force against. By simply changing the disc shape, globe valves can be used for both throttling (controlling flow rate) and for on and off flow control. A globe valve, different from ball valve, is a type of valve used for regulating flow in a pipeline, consisting of a movable disk-type element and a stationary ring seat in a generally spherical body.

Wye Pattern Globe Valve - Wye Pattern globe valves, among globe valves, offer the least resistance to flow. They can be cracked open for long periods without severe erosion. They are extensively used for throttling during seasonal or startup operations. They can be rod through to remove debris when used in drain lines that are normally closed.

Angle Pattern Globe Valve - Angle Pattern globe valves turns the flow direction by 90 degrees without the use of an elbow and one extra weld. They have a slightly lower coefficient of flow than wye-pattern globe valves. They are used in applications that have periods of pulsating flow because of their capability to handle the slugging effect of this type of flow.